For many people it may be surprising to know that of the many species of mammals found across the world, bats constitute one of the major taxa. In peninsular India alone these make up for more than a quarter (120+ species) of the mammalian specie found in the subcontinent. Despite this fact, it’s a paradox that these flying mammals are among the least known and often despised species. Much of the acrimony towards these maligned creatures are perhaps owed to their unaesthetic appearances and uncanny habits. Moreover being nocturnal creatures, they are not so well appreciated as with other animals. Several myths mar their reputation. They have always been depicted as vampires or evil creatures in novels and movies world over.

Bats are the only mammals equipped to fly (not glide), though they lack hollow skeletal structure and feathers unlike birds. They have a thin stretchable membrane between their legs and fingers which are called webbings. These webbings give them the ability to have a functional wing and have a genuine flight. The wings of bats are very thin compared to birds which allows them to maneuver more precisely. Since the wing membranes are very thin they are prone to tear, but have the ability to repair and heal themselves. 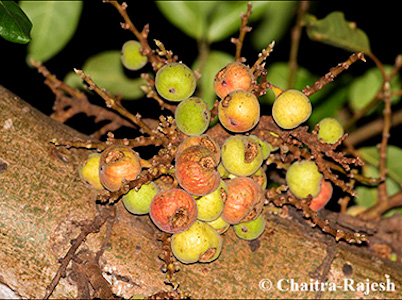 Bats are broadly classified into two groups, megabats and microbats. Megabats are usually large and live primarily in tropical regions. The megabats (fruit & pollen eating or nectar feeding bats) have well developed eyes and nose and hence use their eye sight and sense of smell to locate fruits and flowers. The microbats (insectivorous bats) are usually smaller than megabats and have small eyes but large ears. Microbats constitute 70% of bat species while megabats constitute most of the remaining 30% species.

The megabats are commonly known as fruit bats and live in large colonies on tree tops or in caves. The fruit bats have large foraging range often ranging more than 50Km. While the microbats too roost in large colonies they prefer caves, rock crevices, old mines, tree hollows and manmade structures like under bridges, culverts, attics, ruins. However there are few species of microbats that prefer a solitary life. The microbats have a relatively small foraging area.

The bats play a very important role in ecology by acting as seed dispersal’s and insect control. Their fecal dropping are known as “Guano”, and is highly rich in nitrogen, phosphorous and calcium apart from fungi and bacteria. These ingredients make bat guano as one of the best organic fertilizers. The bat guano is harvested by people around the world and used as fertilizers for their fields. 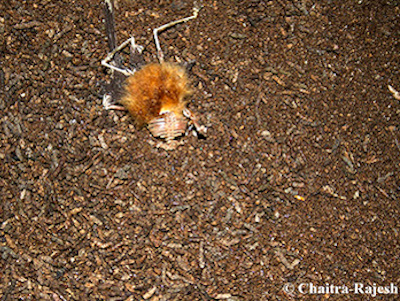 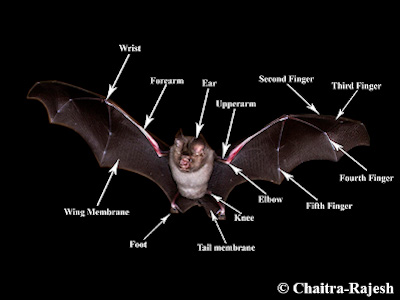 Bat have varied shapes and sizes which reflect their feeding habits and they also vary in colour and fur texture. Bats are mammals which are adapted to flight, as a result they have an easily recognizable appearance. The skeletal structure of bat wing is made up of extensively modified forelimb bones. The legs are also modified wherein the hind limbs are rotated 180 degrees pointing backwards. This change in their anatomical structure gives them the ability to hang upside down.

The diet of the bats varies from fruits, flowers, nectar, insects, birds, fish and even small mammals. Bats usually consume almost one third their body weight of food. The megabats which are usually larger in size fee on fruits, flowers, pollen and nectar. The microbats primarily eat insects (invertebrates), but there are few species of microbats that feed on rodents and fish. The microbats track their prey using echo location and catch them by their teeth either in air during flight or from the ground or foliage. Bats have an unusual habit of drinking water in flight especially the microbats, while the megabats wet their body by dipping themselves in flight but lick from chest once they fly to roost. 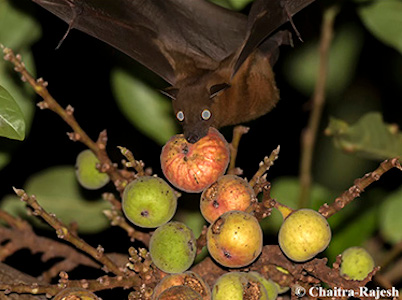 Bats use varied form of communication like most other mammals do. The microbats have also evolved a more complex system of using ultrasound by producing sonar signals. This form of communication is known as “Echolocation” and bats use these ultrasonic clicks to communicate between each other, to detect prey and also to navigate in flight. The megabats do not use ultrasound to detect their food or to navigate as they posses better vision and olfactory system to detect and identify fruits and nectar.